The urban farmer and researcher Sílvia Baptista, based in Rio de Janeiro, together with the artist Barbara Marcel and the journalist Camila Nobrega will host a debate, with the focus on the ongoing narratives about social-environmental conflicts and the current situation of struggle in Brazil not only for the right to land, but for the right to livelihoods, community practices and common imaginaries. From a local-global perspective the aim is to discuss asymmetries of power related to land rights and, simultaneously, to the production of discourses. As three ¨cariocas¨ (people born in Rio de Janeiro city) with different backgrounds but looking for entlangled knowledges and practices, they propose a discussion on the role of patriarchy and coloniality in organizing bodies and territories.

The public talk is at the same time the closing debate of Situated knowledge / Global ecologies: a collaborative Walkshop Ramble on social-ecological justice, initiated by Nobrega and Marcel, which will take place between September 2nd and 4th in Prinzessinnengarten Kreuzberg in Berlin. The project brings together academic researchers with environmental activists, journalists and artists, for an experimental format of knowledge exchange. The main themes are guided by different understandings of what has been called ecology and the global dynamics of knowledge production and narratives about the territories, seeking decolonial and antipatriarchal views. Although the debate has a global dimension, the starting point is the Brazil-Germany relationship.

SILVIA BAPTISTA identifies herself as a black woman of Quilombola origin. She is above all a fighter for social concerns. Sílvia was part of the feminist social movements of the 80s in Brazil, when she worked in the popular housing movement and against expulsions. She was co-founder of the Association of Farmers of Vargem Grande (Agrovargem), where she developed local strategies in the field of agroecology. She is a member of the Coletivo Popular de Mulheres da Zona Oeste of Rio de Janeiro. She is part of the project management of the project „Living and Planting in the Metropolis“ (Morar e Plantar). She is articulator of the Feminist Network of Communication in Agroecology (Teca). She has an educational background, specializes in innovation management in phytomedicine and has a master’s degree in natural sciences, worked as an assistant in the research of the Fitorixi Network: Ethnobotany and Conservation of Medicinal Plants as a subsidy for the introduction of native Amazonian species into the Unified Health System of Oriximiná – Pará, Brazil. She is currently a PhD student in Urban and Regional Planning (IPPUR-UFRJ).

BARBARA MARCEL is an artist, filmmaker and writer interested in the cultural roots of nature and the troubled heritage of colonial imagery. Marcel is graduated in Film Studies in Rio de Janeiro, holds a M.A from the Art in Context Institute, Universität der Künste Berlin (UdK) and is currently a PhD candidate at the Bauhaus-Universität Weimar as a fellow researcher of the Heinrich Böll Foundation. Her artistic research PhD investigates the essay film as a historiographical tool for decolonial thinking with and through images, focusing on issues related to the history of social-environmental connections between Germany and Latin America. Parallel to her individual research, she often collaborates with other artists, researchers and activists on projects resulting in visual and sound pieces, installations, lectures, publications and participatory workshops about ecological processes of thinking and practicing in times of environmental crisis and increasing social inequalities. In Berlin, she is part of the collective GIRA – Festival de Resistências, RefrACTa and Fórum Resiste Brasil. http://www.barbaramarcel.com

CAMILA NOBREGA is a Brazilian journalist and researcher. She has published in different media vehicles, such as The Guardian newpaper (Global Development Professionals Network), O Globo, Le Monde Diplomatique, Canal Ibase, Nzinga Effect among others. In the last years, however, she has worked directly with community based communication and independent journalism, especially focused on social-environmental justice and Gender issues, The journalist is also a member of Intervozes, a collective on the struggle for media democratizatio and right to communication in Brazil. Camila is a PhD candidate at the Political Science department at Free University of Berlin, holds a scholarship of the Heinrich Böll Foundation and works with different communication languages, such as Text, Photography, Audio and Video. 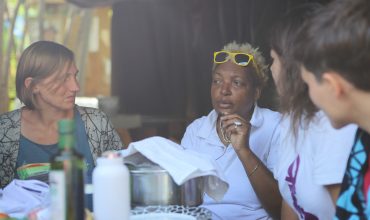